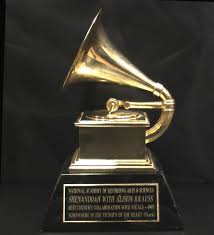 Are you old enough to have seen a Gramophone? Growing up in Georgia in the late forties and fifties we had three means of in home entertainment. A Gramophone, a large radio with several clear tubes and a very capricious and chubby red-headed kid named Larry. I thought Larry was pretty funny but that feeling was not universally shared in our household.

A source no less reliable than Saint Marty told me the “Grammy’s” were the best of all the media driven, self-congratulatory award shows on TV. Since we are now in a new year and I am looking for Husband of The Year points naturally I recorded last night’s Grammy’s and we watched it a little later – skipping the commercials.

To tell you the truth I thought the show was quite entertaining. Sure – it’s all about back slapping and personal aggrandizement and generally violates all of Christ teaching about humility. What do you expect, it’s TV?

The first Gramophone Awards – given out by the National Academy of Recording Arts and Sciences (NARAS) was in 1959 and the big winners were Henry Mancini and Ella Fitzgerald. That was back in the day when an artist really had to be talented and since very few people had access to TV the quality of your talent was far more important that how hot and sexy you were. The small trophy NARAS gave out was called the Grammy and thus the long-term name of the show.

If – and I repeat if – last night’s Grammy show is representative of today’s music industry here are a few thoughts from the Mind of Uncle Larry.

First, no matter which Genre was being performed, nor the color of the artist skin, there are an unbelievable amount of really musically talented people plying their craft in each field. Fortunately last night’s show did not feature my least favorite musical format – RAP or can I say CRAP on the internet. I’m hoping its on the decline but fear I may be wrong.

Second, if the songs and artists didn’t come pre-labeled as pop or rock or folk or country you could throw a blanket over them all they sound so much alike. Listening to last night’s show I certainly couldn’t tell when pop stopped and country started and or how rock and folk rock were much different from both of the above.

Finally, other than Adele – perhaps the best pure vocalist recording today – one things is obvious. To make it you gotta be hot. Male or female you have to be looking good and willing to put it out there.

Well that’s it – you just wasted another four minutes of your life.